On July 26, 2019, the U.S. Federal Register published the Environmental Protection Agency’s (EPA) proposed amendments to the provisions in the National Emission Standards for Hazardous Air Pollutants (NESHAP). The primary purpose of the proposed amendments is to withdraw the “Once In, Always In” (OIAI) policy regarding the classification of facilities as major sources of hazardous air pollutants (HAPs) subject to Maximum Achievable Control Technology (MACT) standards. A major source is defined as any facility which emits at least 10 tons per year of any HAP or at least 25 tons per year of any combination of HAPs. A facility that is not classified as a major source is considered an area source. The OIAI policy, issued in 1995, required major source facilities that are subject to a MACT standard to permanently comply with that standard even if a facility reduces its HAP emissions below major source thresholds. The withdrawal of the OIAI policy was also previously discussed in EPA’s guidance memorandum issued on January 25, 2018. END_OF_DOCUMENT_TOKEN_TO_BE_REPLACED

EPA is working on the Information Collection Request (ICR) for Plywood and Composite Wood Products (PCWP) National Emission Standards for Hazardous Air Pollutants (NESHAP). The comment period for preparing the ICR ended on November 7, 2016. This is the MACT standard commonly referred to as the Kiln MACT as it will apply to lumber drying kilns in some fashion, in addition to plywood and composite wood products. END_OF_DOCUMENT_TOKEN_TO_BE_REPLACED

If you have elected to comply with the Boiler MACT regulation through performance testing, the deadline for the broad majority of existing boilers to complete the performance testing was July 29th, 2016. For the sake of this blog entry, we’ll assume you have done this. (If not, you should contact us immediately and we can get you up to speed!) END_OF_DOCUMENT_TOKEN_TO_BE_REPLACED

On July 29, 2016, the U.S. Court of Appeals for the D.C. Circuit ruled on the lawsuits over EPA’s Boiler MACT (40 CFR Part 63, Subpart DDDDD) and Boiler GACT (40 CFR Part 63, Subpart JJJJJJ) regulations. The lawsuit was the consolidation of multiple suits from industry and environmental groups. The split of the suits from industry versus environmental groups was stated by the court to be approximately 50/50. In summary, the court rejected all the industry petitions and granted some of the petitions from environmental groups. The most significant aspects of this ruling pertain to vacating portions of the standard and remanding additional portions of the standard to EPA to provide further explanation.

Under the Boiler MACT regulation, boilers are divided into subcategories based on the type of fuel utilized and the configuration of the combustion unit. END_OF_DOCUMENT_TOKEN_TO_BE_REPLACED

Read the rest of our article in Waste Advantage Magazine online (http://goo.gl/8idkTR) or in the April 2016 digital edition (http://www.mazdigital.com/webreader/38250?page=35).

If you missed our free webinar on Boiler MACT Compliance, you can stream it online now on your own time. To view the webinar visit http://ehsdailyadvisor.blr.com/2015/12/6761/ and register to view (or enter your email if already registered). 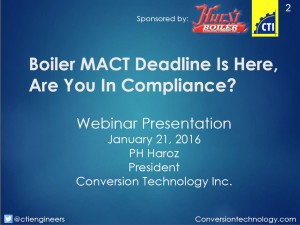 If you wanted to have the presentation slides from the webinar, we have made them available here: 2016 Boiler MACT Webinar Slides.

The Q/A for the webinar is available here: QA Boiler MACT Webinar.

If you have any questions or comments about Boiler MACT Compliance or the webinar, feel free to contact us at 770-263-6330 or cti@conversiontechnology.com

If your facility is covered under the Boiler MACT rule, the compliance deadline is January 31, 2016 ! END_OF_DOCUMENT_TOKEN_TO_BE_REPLACED

Boiler Area Source applies to a boiler in a facility with actual emissions of Hazardous Air  Pollutants (HAP) less than 10 tons per year of any single HAP or less than 25 tons per year of all HAPs combined. EPA allows Boiler Area Source facilities the use of Generally Available Control Technologies (GACT) or management practices to reduce emissions of hazardous air pollutant (as compared to Boiler MACT facilities explained later requiring stricter practices). If your facility is an Area Source, you should have submitted the Initial Notification Report and Notification of Compliance Status to the State and US EPA by May 31, 2013. END_OF_DOCUMENT_TOKEN_TO_BE_REPLACED

Check our site http://www.boilermactcompliance.com to see if Boiler MACT or Boiler Area Source is applicable to your facility.

The January 31, 2016 Boiler MACT deadline is rapidly approaching. You must be in compliance with the applicable requirements of the Boiler MACT rule by this deadline.

Most of you have completed the Energy Assessment and Tune-Up of your boilers as required by the Boiler MACT rule. However, the Energy Assessment and Tune-Up requirement is a small and relatively easy, part of the Boiler MACT rule. More actions are required for your facility to be in compliance with the rule such as: END_OF_DOCUMENT_TOKEN_TO_BE_REPLACED